The Pharisees came and began to argue with him, seeking from him a sign from heaven to test him. 12 And he sighed deeply in his spirit and said, “Why does this generation seek a sign? Truly, I say to you, no sign will be given to this generation.” 13 And he left them, got into the boat again, and went to the other side. 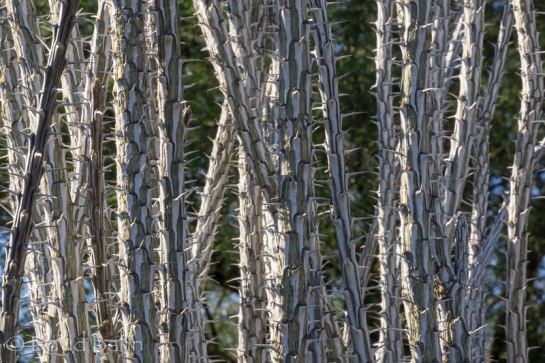 Perhaps the photo of a cactus fence could be symbolic of our difficulty in grasping the fullness of who Jesus is, and understanding of what he was all about. (Photo taken at Desert Botanical Garden, Phoenix, AZ, January 2017)

I am an intuitive person. That’s not bragging; there are as many downsides to being intuitive as there are benefits. When I’m right – when I get it – life, the world, and the deepest darkest mysteries make sense. When I don’t get it I’m lost. When I’m wrong about my intuitive conclusions it’s not pretty. And when I don’t get it (chemistry for example) I really don’t get it. Since I’m an intuitive person, a plethora of information and details will as easily confuse me as they will help me understand (did I say chemistry already?).

I’m not certain Jesus was asking the disciples to be intuitive on this occasion, but he certainly is disappointed – maybe even distressed – that they don’t understand who he is and what he is able to do. Jesus wasn’t concerned one whit about how much bread they had to eat. He could multiply the one loaf they had, and feed them all with fishnets full of leftovers! He was warning them against the influence (leaven) of the Pharisees.

Jesus knew that the danger of the Pharisees’ influence was not in their outward piety per se. The problem was that they used that to hide unbelieving hearts. They were worried more about what man thought than what God thought. The Pharisees considered Jesus to be a threat, not a blessing. They considered his ways a detriment to knowing and serving God rather than the way to God, the source of life and salvation, and the true expression of what it means to love God and neighbor.

Because of all that, and because they were so obviously religious and given to outward piety, their influence could easily make its way into the disciples’ thinking. The Pharisees were large and in charge. By contrast, Jesus was leading a ragtag band of fishermen a former taxcollector, and the like on a mission that was devoid of outward religious trappings on a mission to reveal the rule and reign of God. Wasn’t that to be seen in temple sacrifices and synagogue gatherings?

Jesus did not reject the religious rituals or sacrifices or offerings (cf. Luke 17:11-14, Matthew 17:24-27). It was his custom to go to synagogue (cf. Luke 4:16). But Jesus knew that such outward behavior was only part of true worship and discipleship. He realized that the disciples needed to be careful of the influence of those who would say that such outward piety was all that mattered.

The Pharisees’ request for a sign would never be satisfied. They refused to acknowledge Jesus for who he was. They were unwilling to repent and believe the Good News of the timely presence of the rule and reign of God in the person of Jesus. That understanding centers our hearts in Jesus 24/7. It enlivens our worship. It inspires acts of love and kindness. It gives us hope whatever challenges or difficulties we may face. It sustains us eternally. That understanding changes everything.