In those days, when again a great crowd had gathered, and they had nothing to eat, he called his disciples to him and said to them, 2 “I have compassion on the crowd, because they have been with me now three days and have nothing to eat.3 And if I send them away hungry to their homes, they will faint on the way. And some of them have come from far away.” 4 And his disciples answered him, “How can one feed these people with bread here in this desolate place?” 5 And he asked them, “How many loaves do you have?” They said, “Seven.” 6 And he directed the crowd to sit down on the ground. And he took the seven loaves, and having given thanks, he broke them and gave them to his disciples to set before the people; and they set them before the crowd. 7 And they had a few small fish. And having blessed them, he said that these also should be set before them. 8 And they ate and were satisfied. And they took up the broken pieces left over, seven baskets full. 9 And there were about four thousand people. And he sent them away. 10 And immediately he got into the boat with his disciples and went to the district of Dalmanutha. – Mark 8:1-10 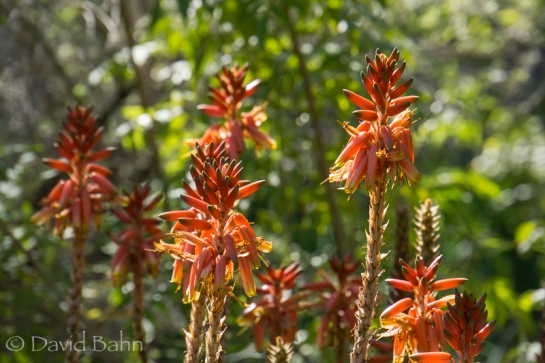 Flowers bloom in the desert at the Desert Botanical Garden in Phoenix, AZ. January 2017

I heard a rather famous TV preacher speak about Jesus’ miracle of feeding the 5000 (cf. Mark 6:34-44) with the few fish and loaves. His take surprised me – both because I hadn’t expected him to discount the miraculous nature of Jesus’ miracle, and because I had never heard of it before. He said this was a miracle of sharing, not of abundant provision and miraculous multiplication. He suggested that in those days people had large robes and tunics in which they would carry a day’s food, and that when they saw the little boy share his lunch they were moved to do the same; out came their lunches and there was enough for everyone. Touching, yes. But nowhere near what Mark reports – either there in Mark 6 or here in the account of feeding 4000 people.

It strikes me that the people had been with Jesus for three days. Perhaps the crowd had been larger to begin and after a while had dwindled as people had to get back to their daily routines. It might have been that the crowd had grown over those three days. In any event, Jesus recognizes their presence for three days, the difficulty of sending them away without food (v. 3) – not only noting this, but having compassion for them. The word, (as pointed out yesterday by my colleague, Pastor Jeff Doria in his message about this event) for compassion in the Greek language is an onomatopoeia. Σπλαγχνίζομαι (splagchnizomai) is the word translated as, “I have compassion,” is, in Jeff’s words, like the sound that is made if you take a pound of sausage and throw it onto the counter. It literally has to do with the turning of the guts – gut-wrenching you might say. Jesus not only noticed the plight of these people, he was moved in his being by their difficult situation.

This is also a matter-of-fact event. No amazement of the people or the disciples is recorded. They don’t point out how he did all things well. They don’t want to come and make him king. They simply eat and are satisfied. He goes on his way, and they go theirs. Fed. Thankful (hopefully). Reminded of God’s daily provision.

I wonder if we take God’s compassion for granted. He not only sees our needs, but responds with compassion to us – most dramatically in sending Jesus to save us, and restore us to a living relationship with God, now and forever. We are called to thank God in all circumstances (cf. 1 Thessalonians 5:18). That means whether we have plenty or find ourselves three days into a time of need, we are to recognize God’s goodness and thank him for his loving care and compassion. That’s what led God to act in our behalf in the first place – for which we can all give praise and thanks to God.