[Daniel says,] “To you, O king, as you lay in bed came thoughts of what would be after this, and he who reveals mysteries made known to you what is to be. 30 But as for me, this mystery has been revealed to me, not because of any wisdom that I have more than all the living, but in order that the interpretation may be made known to the king, and that you may know the thoughts of your mind.

31 “You saw, O king, and behold, a great image. This image, mighty and of exceeding brightness, stood before you, and its appearance was frightening.32 The head of this image was of fine gold, its chest and arms of silver, its middle and thighs of bronze, 33 its legs of iron, its feet partly of iron and partly of clay.34 As you looked, a stone was cut out by no human hand, and it struck the image on its feet of iron and clay, and broke them in pieces. 35 Then the iron, the clay, the bronze, the silver, and the gold, all together were broken in pieces, and became like the chaff of the summer threshing floors; and the wind carried them away, so that not a trace of them could be found. But the stone that struck the image became a great mountain and filled the whole earth.” – Daniel 2:29-35 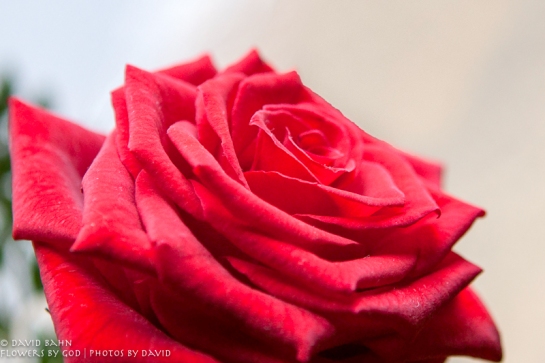 Rose at the Wartburg Castle | September 2010

A favorite movie of mine is the quite old and very romantic, funny, quotable movie with a dramatic and violent ending: Butch Cassidy and the Sundance Kid. One scene has Butch and Sundance running from the law big time. They are far above the posse and watch in disbelief as they are being tracked over a rocky formation. Butch says, “Who are those guys? They’re tracking us over solid rock. I couldn’t do that. Could you do that? Why can they do it? Who are those guys?”

He could well have been talking about Daniel: Nobody can tell an interpretation of a dream when he hasn’t even been told the dream. But he’s doing it. I couldn’t do that. Could you do that? Why can he do that? How did he know that? Who is this guy?!?”

Daniel, however, is completely unwilling to take credit for this fete. He has already disclaimed any honor for himself in this revelation:

Daniel answered the king and said, “No wise men, enchanters, magicians, or astrologers can show to the king the mystery that the king has asked, 28 but there is a God in heaven who reveals mysteries, and he has made known to King Nebuchadnezzar what will be in the latter days. – Daniel 2:27-28

Now he takes the next step of honoring God, and revealing the purpose and reason it has been revealed to him:

But as for me, this mystery has been revealed to me, not because of any wisdom that I have more than all the living, but in order that the interpretation may be made known to the king, and that you may know the thoughts of your mind. (v. 30)

Daniel glorifies God by claiming no merit of his own in being able to reveal the dream. It wasn’t because he was wise, intelligent, or handsome that God revealed it. It was so that the king would know his own thoughts, and (hopefully) be able to find some peace of heart in these troubling days. He will soon be more troubled, though he will at least be able to name the issue.

To claim anything because of our pedigree, position, or progeny brings glory to ourselves. It robs God of being the be all and end all of all things. It undercuts the message that God wants to convey to the whole world: That he is good, gracious, generous and kind.

Daniel will not get in the way of that message. In fact, he will eventually name his God and reveal the character and nature of “the God of heaven.” God is the final authority over all. He rules and reigns over all things. He guides the heart of the king. He is also gracious, loving, kind, and merciful. He is showing this at one time as he reveals the king’s dreams through his servant.

If Daniel were to answer the question, “Who is that Guy?” He would say, “I am a servant of the God of heaven.” For him that might be enough. I wonder if we could move closer to that kind of answer if ever someone asked who we are. I wonder whether or not we might wish to be known as such when we are asked. We may not have dreams to reveal, but we followers of Jesus have a story to tell of God’s dream and plan for our redemption and eternal salvation. Jesus is, after all, the Guy – the One who is above all and deserving of our praise, devotion, and witness whenever we have the chance to do so.