“My soul glorifies the Lord
47     and my spirit rejoices in God my Savior,
48 for he has been mindful
of the humble state of his servant.
From now on all generations will call me blessed,
49     for the Mighty One has done great things for me—
holy is his name.
50 His mercy extends to those who fear him,
from generation to generation.
51 He has performed mighty deeds with his arm;
he has scattered those who are proud in their inmost thoughts.
52 He has brought down rulers from their thrones
but has lifted up the humble.
53 He has filled the hungry with good things
but has sent the rich away empty.
54 He has helped his servant Israel,
remembering to be merciful
55 to Abraham and his descendants forever,
just as he promised our ancestors.”

56 Mary stayed with Elizabeth for about three months and then returned home. 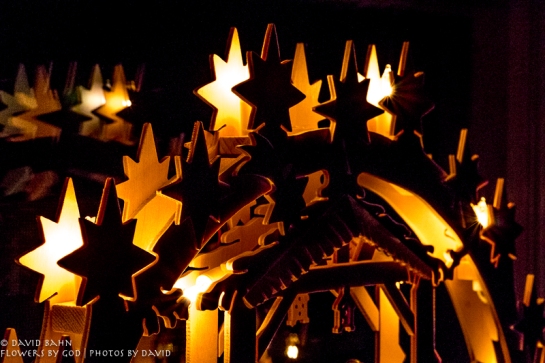 Stars atop our German Nativity | December 2017

I’m reading an historical novel by Ken Follett about the years after the Protestant Reformation, and the death of Martin Luther. It includes episodes of the radical reformation and the Spanish Inquisition. Follett manages to paint certain characters is a sufficiently evil light to cause me to hope for their demise. I yearn to turn the page to learn how an evil, scheming, and manipulative character gets the rug pulled out from under him. I so want him to get his comeuppance!

Once in a few pages one of the bad characters gets perilously close to receiving his due, only to see evil continue, and wiggle out of the clutches of justice. It’s clear that the day of reckoning will come – at least I hope so – but it is slow in coming.

Mary is seeing that day approach in bold relief and expresses as much in her wonderful song of praise to God. He is the One who will bring down the mighty from their thrones. He is the One who exalts those of low degree. He is the One who has brought down rulers and lifted up the humble. He has regarded the low estate of his servant Mary. Justice is coming to her aid. She who trusted God’s word, who was willing to say, “I am the Lord’s handmaid. Be it to me as you have said,” is filled with joy, hope and praise.

Sometimes we may yearn for justice to suit our own personal goals and sensibilities. Sometimes our justice-seeking is myopic and self-serving. God has a way to deal with that as he calls his people to live in a state of constant humility, repentance, and faith. But when we see evil triumphing, and ruthless power-mongers leaving behind the scorched earth of injustice and tyranny, cruelty and corruption, it is good to know that God will one day bring down the mighty and exalt the humble.

As we await that day, it is good for us to sit with Mary, as the Lord’s servant, letting his will be done in and through us, leaving the comeuppance to God, and rejoicing in God’s even better gift of grace, life, and salvation.