When the angels had returned to heaven, the shepherds said to each other, “Let’s go to Bethlehem! Let’s see this thing that has happened, which the Lord has told us about.”

16 They hurried to the village and found Mary and Joseph. And there was the baby, lying in the manger. 17 After seeing him, the shepherds told everyone what had happened and what the angel had said to them about this child. 18 All who heard the shepherds’ story were astonished, 19 but Mary kept all these things in her heart and thought about them often. 20 The shepherds went back to their flocks, glorifying and praising God for all they had heard and seen. It was just as the angel had told them. – Luke 2:15-20 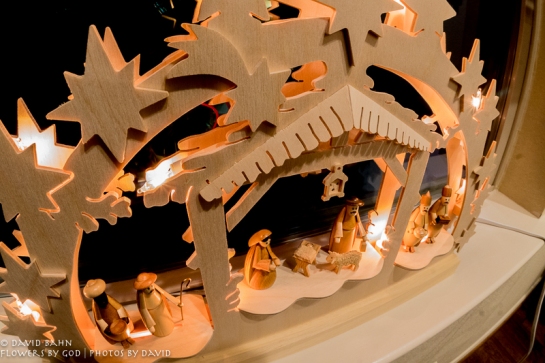 German Nativity Decoration in the Window Sill of our Kitchen

It’s the only venue at which I have been interrupted in the middle of a sermon…by applause! Two hundred men, all wearing white, many smelling of tobacco, or long-worn perspiration-soaked clothes sat in the pews of the chapel of the medium-security prison. Our choir had performed portions of our cantata for them and I was preaching. When I mentioned the passage in Revelation that says, “Its gates will never be closed,” (Revelation 21:25) I asked, “How does that sound to you?” There was immediate and thunderous applause. I don’t think it was my preaching that was the object of their applause. I’m certain it was the idea of an open-door eternity.

During the entire sermon that night one man sat in the front row. He was bigger than life and had a manner of authority when he spoke. Several times he nearly shouted, “Think about it!” Think about it indeed. It is good for us to recognize how great a blessing God has given us in saving us. It is worth, perhaps, even breaking into applause when we recognize the enormity and richness of God’s blessings. We’ll seldom do that, however, unless we think about it.

Mary takes the lead here. She kept the events of that night in her heart and thought about them often. Certainly she has an upper hand in this. She had given birth. She had been visited by shepherds. She had been told, I’m sure, about the angels’ announcement. She had experienced earth-shattering history. It would stand to reason that she thought about it often.

We have not had that same experience. Though some of us may recall dramatic intrusions of God, none of us have borne the savior of the world. But we have seen God’s hand in our lives. Perhaps it’s an answered prayer. It could be a relief of pain or healing of illness. Some have had a personal encounter with God – hearing him speak in words as plain as day. It could also be a lifelong experience of knowing Jesus and believing in him.

It may be that we cannot point to a dramatic event, but we can point to the witness of God’s word, and the experiences of others who bear witness to God’s faithfulness, goodness, love, and salvation. In any case we may also ponder in our hearts. We can think about what it means that Jesus has come and redeemed us.

To that end, I appreciate the explanation to the 2nd article of the Apostles’ Creed, which says:

I believe that Jesus Christ is true God, begotten of the Father from eternity, and also true man, born of the virgin Mary; and that He is my Lord, Who has redeemed me, a lost and condemned creature, purchased and won me from all sins, from death and from the power of the devil; not with gold or silver, but with His holy, precious blood, and with His inno­cent suffering and death; in order that I might be His own, live under Him in His kingdom, and serve Him in everlasting righteousness, innocence and blessedness; even as He is risen from the dead, lives and reigns to all eternity. This is most certainly true.

That’s a lot to think about!