Therefore remember that formerly you, the Gentiles in the flesh, who are called “Uncircumcision” by the so-called “Circumcision,” which is performed in the flesh by human hands— remember that you were at that time separate from Christ, excluded from the commonwealth of Israel, and strangers to the covenants of promise, having no hope and without God in the world. But now in Christ Jesus you who formerly were far off have been brought near by the blood of Christ. For He Himself is our peace, who made both groups into one and broke down the barrier of the dividing wall, by abolishing in His flesh the enmity, which is the Law of commandments contained in ordinances, so that in Himself He might make the two into one new man, thus establishing peace, and might reconcile them both in one body to God through the cross, by it having put to death the enmity. And He came and preached peace to you who were far away, and peace to those who were near; for through Him we both have our access in one Spirit to the Father. So then you are no longer strangers and aliens, but you are fellow citizens with the saints, and are of God’s household, having been built on the foundation of the apostles and prophets, Christ Jesus Himself being the corner stone, in whom the whole building, being fitted together, is growing into a holy temple in the Lord, in whom you also are being built together into a dwelling of God in the Spirit. – Ephesians 2:11-22 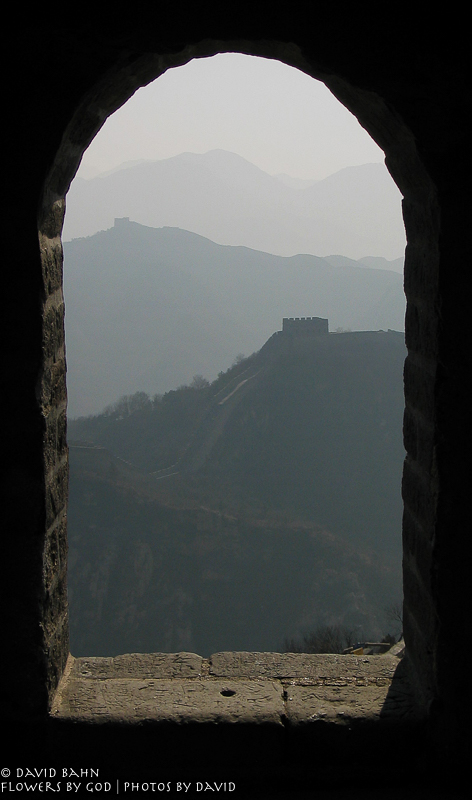 Following a mission trip to Hong Kong and southern China, Diane and I took a personal side trip to Beijing, Xian, and Okinawa (where our son was stationed in the US Army at that time). Our trip to Beijing included a trip to see the Great Wall of China. It was impressive, a bucket list experience. The beautiful view from the Great Wall was stunning.

On a trip to Germany we visited Berlin. There we saw where the Berlin Wall went through the middle of the town. I vividly recall stomping on the cobblestones that were inlaid in the street where the Berlin Wall had been. There was something viscerally satisfying about doing that. That which was built to keep people apart was now a monument to the This Was an Evil Thing history of that city. We even toured a city that was divided in the middle of night – walls running through houses and dividing families from one another.

In Jesus’ day the temple was built with a literal wall of separation that segregated the Gentiles from the Jewish people. One commentator states that this “low wall separated the Gentile Court from the Temple enclosure itself. This wall was called, ”Soreq”, in Hebrew, and had thirteen openings in it to allow Jews only to enter from the Gentile Court into the four other courts. No Gentile was permitted past this dividing wall.”

Can you imagine how difficult it was for the Jewish people to think that Gentiles could have direct access to God? Even they weren’t allowed  into the Holy of Holies behind the curtain in the temple. That place – location of the Mercy Seat and place of God’s holy presence – was accessed only once a year by the high priest. Even he was chosen by lot to go in. And a rope was tied to his waist so that if he died he could be pulled out without the others going into that sacred place.

Now there is no wall?!? Impossible! Except that something happened when Jesus died. The wall was torn down. The curtain in the temple was torn in two. The wall of separation between God and all people was split. The implications of that reach not only into the heavenly realm, but across the span of humankind. Whoever believes in Jesus is a son or daughter of God. We are brothers and sisters in Christ. There is no wall that separates us.