Three young men were out for the night. One of the three rode in the back seat. The other had already claimed shotgun.” It would be a great night. On many levels, however, it was not. One of the guys had gotten ahold of some marijuana. “Hey you guys! Look what I have! Want to smoke some weed?”

He was too afraid to say what he felt. He was actually scared. He didn’t want to get into trouble. He didn’t want to look like a chicken in front of his friends. He didn’t want to lose his chance to have some fun with his buddies that night. He said nothing. They went to a remote park and the two front-seat mates lit up. “Here you go. This is pretty good stuff.” Their conversation was a bit more colorful than that actually. There were grunts and sighs, groans and sniffs. There were colorful words describing the “stuff.” You get my drift.

Still nothing from rider number 3. Somehow he wasn’t put on the spot. They didn’t force it on him. But after a while his curiosity got the better of him. He asked, “So let me have some.” They obliged. He coughed on the first drag. They laughed at him. He did better on the second try. They all laughed. Satan smiled.

Make no mistake. This was not a first step into the deep chasm of drug addiction. It wasn’t really even a foray that would continue long. It was the essential first element of Satan’s design. It was a matrix of lies woven carefully into a beautiful blanket of blinding deception.

When Satan tempted Eve, it wasn’t only about a fruit that was good for food, desirable for gaining wisdom, and pleasing to the eye. It was the web of lies Satan never even spoke directly – he is a deceptive and slick one!

Rider number 3 never really saw the greater harm of that moment. Satan smiled because he knew he had taken someone’s innocence, and undercut his trust in God and good.

The story is not totally fabricated. I was rider #3. There was a temptation offered; though not exactly that one. Let that suffice. But know this well: any time Satan is able to deceive someone he is delighted. Any time we are led to distrust God, to Satan’s lead rather than seeking God’s ways, he has weakened the hold of faith and severed a thread of love. Add those up over time and – without intervention – he’s won the battle.

Ah yes. Intervention. There is that guilt thing. There are those bad feelings of shame or even a headache, a broken relationship, job loss, or even physical illness. Sometimes God uses the just deserts of our sin to wake us up. Sometimes we do become aware of Satan’s designs and rebuke him to his face. Even that may be painful.

We need never feel bad about doing the right thing – even when it hurts. Sometimes that’s the only way we can reveal Satan’s plans and designs to be what they are: a trap of deception, accusation, hopelessness, despair, godlessness, and death. 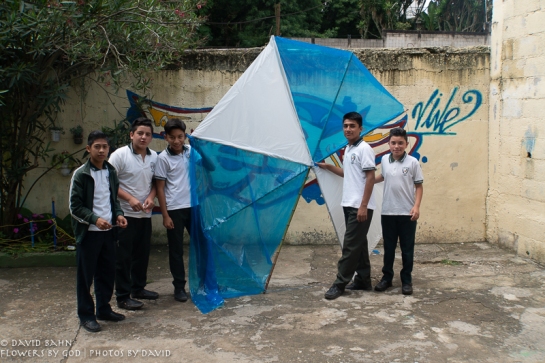 These boys were working on they large decoration for the coming Guatemala Independence Day celebration. September 2018