And God was doing extraordinary miracles by the hands of Paul, 12 so that even handkerchiefs or aprons that had touched his skin were carried away to the sick, and their diseases left them and the evil spirits came out of them. 13 Then some of the itinerant Jewish exorcists undertook to invoke the name of the Lord Jesus over those who had evil spirits, saying, “I adjure you by the Jesus whom Paul proclaims.”14 Seven sons of a Jewish high priest named Sceva were doing this. 15 But the evil spirit answered them, “Jesus I know, and Paul I recognize, but who are you?” 16 And the man in whom was the evil spirit leaped on them, mastered all of them and overpowered them, so that they fled out of that house naked and wounded. 17 And this became known to all the residents of Ephesus, both Jews and Greeks. And fear fell upon them all, and the name of the Lord Jesus was extolled. 18 Also many of those who were now believers came, confessing and divulging their practices. 19 And a number of those who had practiced magic arts brought their books together and burned them in the sight of all. And they counted the value of them and found it came to fifty thousand pieces of silver. 20 So the word of the Lord continued to increase and prevail mightily. – Acts 19:11-20 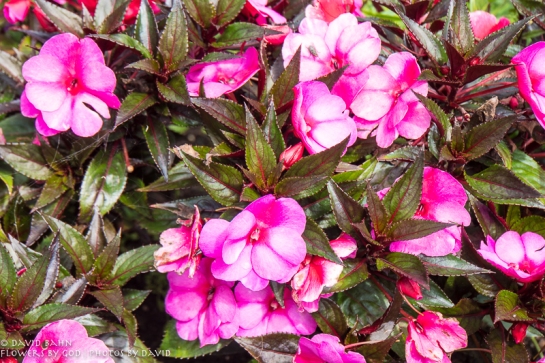 (More) Beautiful flowers at the Gartenschau in Kaiserslautern, Germany | August 2017

My son had the opportunity to take a significant canoe trip with his scout troop through the Boundary Waters – the area between Minnesota and Ontario. The Boundary Waters is a popular destination for those wishing to enjoy camping, canoeing, fishing, as well as for those simply looking for natural scenery and relaxation. It is also an area in which there are a number of “no-see-ums” – tiny gnats or other insects that can make life rather miserable. At least that was his report to us upon returning. I think he also had a good time otherwise.

There are certain things that we simply do not see – whether because they are small and difficult to spot, or sometimes because our eyes are not accustomed to looking for them. Sometimes we simply miss seeing something very obvious for reasons we cannot name. In our home, when that occurs, we will often simply shout, “Snake!”, referring to the saying, “If it was a snake it would have bitten you.” Obvious. Present. Simply overlooked.

I believe we have some built-in filters in North American Christianity that prevents us from seeing some other very significant things. We simply cannot see miracles, healings, or other signs or wonders because we factor them out of our world view. In other areas of the world (less-advanced by our standards) these things are expected, appreciated, and regularly seen. We, however, filter them out; they don’t fit our paradigm of how the world works.

In Paul’s day it was quite a different story, and the abuse they embraced about such phenomena was rather mechanical in nature. You simply said the right words, invoked the appropriate deity, and offered the proper prayer, and the miracle would materialize. So thought Sceva’s seven sons. When they invoked “Jesus whom Paul proclaims” in a magical way (apart from faith) they soon learned the power they were up against was more then they could handle. In the end, their defeat was so complete and convincing that those who practiced magic arts turned away from them – destroying their magic books as a sign of their new allegiance to Christ and his ways. They saw his true power and preeminence in a new light.

What do you see…or refuse to acknowledge that may be keeping you from following in the ways of God?