And the high priest said, “Are these things so?” 2 And Stephen said:

“Brothers and fathers, hear me. The God of glory appeared to our father Abraham when he was in Mesopotamia, before he lived in Haran, 3 and said to him, ‘Go out from your land and from your kindred and go into the land that I will show you.’ 4 Then he went out from the land of the Chaldeans and lived in Haran. And after his father died, God removed him from there into this land in which you are now living. 5 Yet he gave him no inheritance in it, not even a foot’s length, but promised to give it to him as a possession and to his offspring after him, though he had no child. 6 And God spoke to this effect—that his offspring would be sojourners in a land belonging to others, who would enslave them and afflict them four hundred years.7 ‘But I will judge the nation that they serve,’ said God, ‘and after that they shall come out and worship me in this place.’ 8 And he gave him the covenant of circumcision. And so Abraham became the father of Isaac, and circumcised him on the eighth day, and Isaac became the father of Jacob, and Jacob of the twelve patriarchs. – Acts 7:1-8 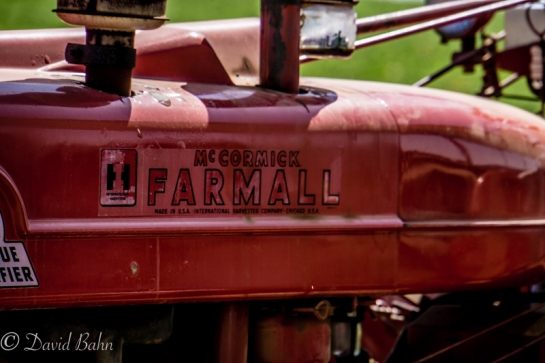 I love old tractors. This was at the Flower Fields in Carlsbad, CA. March 2017

When I was in college, I sang in the college choir. It was a great experience with some really excellent musicians and wonderful music. One of the songs was a bit different: a more modern piece with the words something like this…

You might think that Stephen here is altering those words – especially the second line to, “When in trouble, stall…” You might think that’s what he’s up to. He is in the sights of the opponents of the gospel. They want to trap him, silence him, and make an example of his ill-advised insistence to proclaim Jesus’ death as the fault of all sinners, and his resurrection as the hope of forgiveness for all who believe. He won’t stop. But they surely do want to stop him.

So is Stephen stalling here? Is he trying to put off the inevitable? Not likely to my way of thinking. True, he was telling these Jewish people history they already knew. They probably could have had quite a discussion about the Exodus, circumcision, Abraham, Isaac, Jacob, and the twelve patriarchs.

Stephen is making an important point here: This Gospel of Jesus of Nazareth is not an isolated, disconnected, or novel idea. He is laying the groundwork for a powerful challenge and astounding claim: This was God’s plan from eternity. Abraham was the first in a long line of faith-filled servants of God. God’s salvation comes to those who look to him with the eyes of faith.

His speech will go on for a while. Luke’s account spans 52 verses. The works of God from the time of the Exodus to Joshua, David and Solomon. Soon thereafter the hammer comes down. (We’ll consider that tomorrow.) For now it is enough to be reminded that the truth we know has true implications. We cannot long pick and choose which facet of God’s story to believe and apply to our lives. What God has done long ago has eternal consequences. If we should choose to dismiss what we know because we think we’ve heard it all before, we are in danger of discovering that we fit into the story of God in a  way other than that we would wish or suppose.

Perhaps there is a Sunday school lesson that you need to dust off, and read afresh to learn just how God is working in your life today.