That evening at sundown they brought to him all who were sick or oppressed by demons. 33 And the whole city was gathered together at the door. 34 And he healed many who were sick with various diseases, and cast out many demons. And he would not permit the demons to speak, because they knew him. – Mark 1:32-34 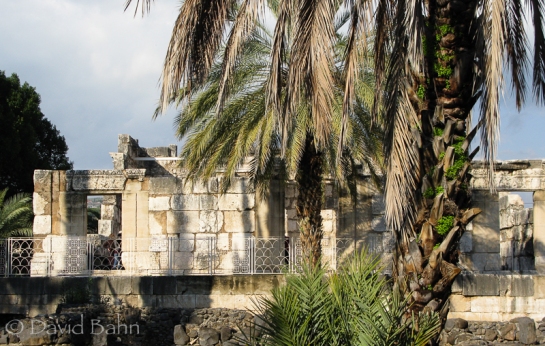 Ruins from a 4th century synagogue, which was built on top of the foundation of the synagogue where Jesus taught as recorded in Mark 1. Photo taken in 2012

Diane and I went to the Houston Symphony last night. It was a birthday present from her which I truly enjoyed! We heard two pieces with which I (and Diane) were familiar: Beethoven’s 5th Piano Concerto, The Emperor, and Liszt’s: Les Préludes. It was a wonderful evening. The orchestra was excellent. The conductor, James Gaffigan, born in 1979 was a delight to watch. The pianist, Behzod Abduraimov was born in 1990, and amazingly gifted! The house, however, was only pleasantly full. The whole city did not come out to see this concert. Good as it was, it seems that not everyone loves classical music, or takes the time to go to a concert such as this was.

In the case of Jesus on this occasion, however, the whole city went out to see him, to be healed of their diseases, and to be relieved of their demon possession. It must have been quite a scene.

Having been to the ruins of Capernaum, where all this occurred, the crowd might have been fewer than 2000 people; its population in Jesus’ day is estimated to have been 1500. And Mark might be using hyperbole by saying that the whole city was gathered at the door. But one thing is clear: Jesus, at this moment, is quite a phenomenon. Everyone wants to see him, to have the touch of his healing hand, to be rid of their demons, or to bring loved ones to experience his grace.

Something new was happening 2000 years ago in Capernaum, and in the world itself. God was breaking in in a delightful, dramatic, and decisive manner. The rule and reign of God was being manifest in Jesus’ teaching, healing, and freeing from the devil’s tyranny.

This Sunday there will be crowds of people gathering at various churches around the world. They will sing the praises of Jesus, the Son of God, Savior of the world, healer of diseases, giver of hope, releaser from bondage. I hope something happens there in those gatherings. I hope that the power of Jesus’ love and forgiveness, grace and kindness will touch someone’s heart so much that he or she will be ushered into the rule and reign of Christ in that believer’s heart. For where Jesus is, and where his word is found and believed, good things happen – no matter how many people gather at the door.